While we all may argue that we can froth milk in a blender, does it just stop there?

Froth milk is also referred to as foamed milk. It is a true saying that the more fat milk contains, the creamier and richer the taste will be. The frothed milk is formed by a process where the skim milk or whole milk is bombarded with steams or energy formed by the regular movement of the milk particles which will, in turn, enable the milk to foam.

Can You Froth Milk In A Blender? You can use the immersion blender or the regular stand blender to froth your milk. For an immersion blender, ensure that your milk is in a tall container that will not allow for spill when pulsing, while for a regular blender, all you need is to pour the milk into the blender container and pulse severally till you get the a bubbly milk and foamy froth.

Usually, a tiny metallic pitcher is used for frothing. The basic reason for milk frothing is usually for espresso drinks formation. Be informed that the amount of fat resident in milk usually impacts the volume and stability of the foamed milk, this implies that; a frothed milk tends to gain volume than the original skim or whole milk, though it becomes generally more stable than the skim or whole milk.

Also, take into consideration that whole milk delivers creamier and thicker froth milk, while the skimmed or low-fat milk usually produces a higher quantity of froth with much air bubbles. In the absence of whole or skimmed milk, one may decide to use soy milk or almond milk and the outcome may have just a little difference.

Why a Blender is a Good Choice for Milk Frothing 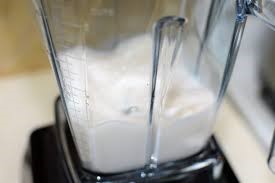 The blender is an excellent choice for milk frothing with its various capabilities and functions in the kitchen duties. Amongst all the wonderful things that a blender can be applied for, milk frothing is one of the functions of the blender that it becomes very easily and quickly without stress.

The hand blenders and the immersion blenders are a perfect kind of blenders for this task. One of the advantages of using the blender to froth milk is that it doesn’t allow spillage of milk during the period of processing, it ensures that all the content of the jar is kept intact until after the process is finished.

The blender also ensures that no quantity of milk is lost during frothing, you get what you gave or even get much more than you gave in terms of volume at the end of the frothing process with the blenders.

When deploying the blender for milk frothing, first of all, ensure that the jar is clean, then get your chilled whole milk or skimmed milk ready, although in the absence of the whole or skim milk, you can use almond milk or soy milk.

Afterward, pour the available milk into the jar then run the blender for 2-3 minutes, sometimes you may need to keep the blender running until the froth is formed, but mostly the milk should begin to foam within the first 2-3 minutes of running blender.

Most importantly, you must ensure that the blender is air-tight covered with the lid as you won’t want to have milk spilled all over your kitchen.

What are the Best Blenders for Milk Frothing

Understand that some of these immersion blenders especially from the producers’ end such as Philips, Vitamix, and Hamilton range of immersion blenders, all have a specially incorporated design such that the blender process the food substance by pressing down through a network of downward centrifugal force. This design helps the blender to avoid spillage, by all means, all though not all design of blenders comes with this special unique build.

If that is the case with your blender, then you should ensure that you use a narrow girthed pot when using the blender also ensure that the pot is as tall as possible.

Prepare your milk in a large pot either chilled milk or warm milk, then place your immersion blender inside the pot ensuring that the blade is perfectly immersed. Turn the blender on starting from the lowest speed and increase gradually if need be until a fine froth is formed.

You might consider getting something called “an all-inclusive carrier”, which could be a metallic cylinder-shaped part that is very tall and narrow. Usually, these immersion blender has as a very long reach as attainable, from which you can take advantage from.

It’s important to switch your blender on only after it has been dunked deep down into the food you wish to mix. This will remove every probability of spillage and will mean that food is pressed downwards into the girth and blade; a natural downward current, so to speak. Try to deploy the up and down insertion of the blender constantly with an occasional side by side movement.

The best practice is to begin out with a low speed and then speed up eventually as the process progresses. Some blenders have various degrees of speed settings from which a user can choose.

The Breville control reviewed above has 15-speed settings, so you can gradually change from lower to higher as you start at the surface of the mixture and gradually plunge. Whether you have Breville control or not, the mode of operations remains the same.

Other Ways Of Milk Frothing

Apart from the use of blenders for milk frothing, there are several other methods by which one can froth his milk even when the blender is not available.

Some of these techniques are ore easier to deploy than the use of blenders while some others are tougher means of milk frothing. In this paragraph, we shall be looking at a few other ways one can easily froth milk just incase the blender is not available or convenient for you.

By shaking in a Jar 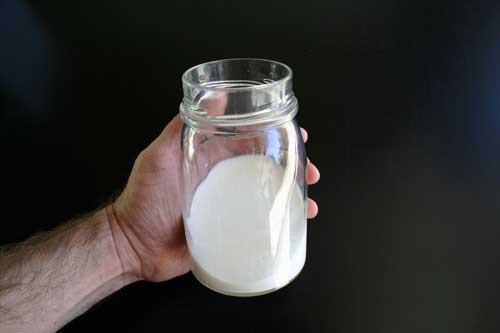 This method is one of the easiest methods to deploy for milk frothing, pour your warm or chilled whole milk or skimmed milk in the jar, afterward close the lid tightly, better if its an air-tight jar, then grab the content of the jar with the fingers and then shake continuously until a froth begins to form.

The cons of this method are that it creates froth with large bubbles, also you shouldn’t grab the jar with your bare hands if the content of the jar is harshly hot.

By this method, you can choose to use cold milk or warm or hot milk, whatever your choice of milk, use the whisk device to whisk your milk thoroughly until the froth is formed.

Usually, the back and forth movement are more effective than the circular movement of the whisk. Although the circular ensures that there is purely uninformed froth at the end of the process. The froth created by this whisk is of a higher quality than the handshaking jar technique.

The electric mixer acts just like the manual whisk mixer just that this one is controlled by an electric motor, now instead of using your hand to turn the whisk device back and forth or circular.

In this case, the electric motor controlled by electricity does all this movements and mixture. Just warm your milk, dip your milk foaming device into the mixture and then turn on the machine, and off you go creating a fine frothed milk. 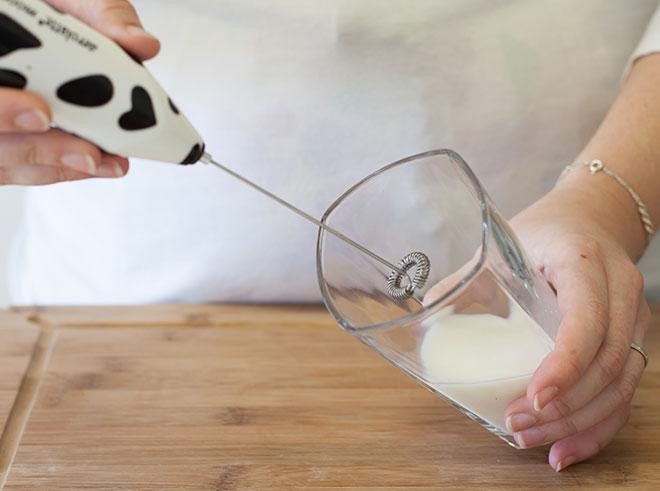 The frothing wand is a piece of mixing device that can be used for milk frothing to form a finely foamed milk without spillage. Once the milk is set to be frothed in the jar, you insert your frothing wand into the mixture and then turn on the wand, you only turn it off when the desired froth is achieved. the wand operates like the whisk device as well due to its directional movements.

Now apart from the milk frothing which the wand is generally known for, it can be used to perform other functions as well, as the whipping of cream for cocoa and the whipping of a small amount of semi-liquid or purely liquid ingredients. 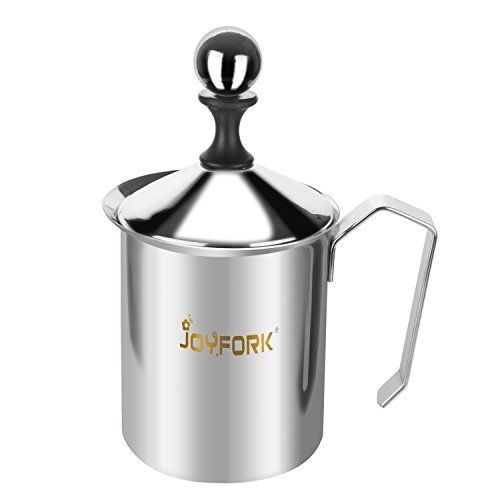 This is a very very special piece of equipment specially manufactured for froth formation, it is hardly available in many homes as it can hardly be used for any other purpose apart from milk frothing.

Therefore, people find it difficult to purchase it when knowing full well that they can only use it for milk frothing. This device makes lovely creamy looking froth, it makes you just fall in love with milk froth.

Warm your milk and then pour into the pump frother jar (this is normally a stainless looking jar with a lid), and once the content is poured into the jar cover with the lid but one must ensure that the jar is not filled to the brim, this is to avoid overflow spillage since the milk normally expands when frothed.

You now pump the handle for about 15-20 seconds, noting that, within this time, the foam will have been formed. Please ensure that the milk to be poured into this pump frother is not extremely;y hot, it is advised that the milk is allowed to cool down after warming before been poured for processing. 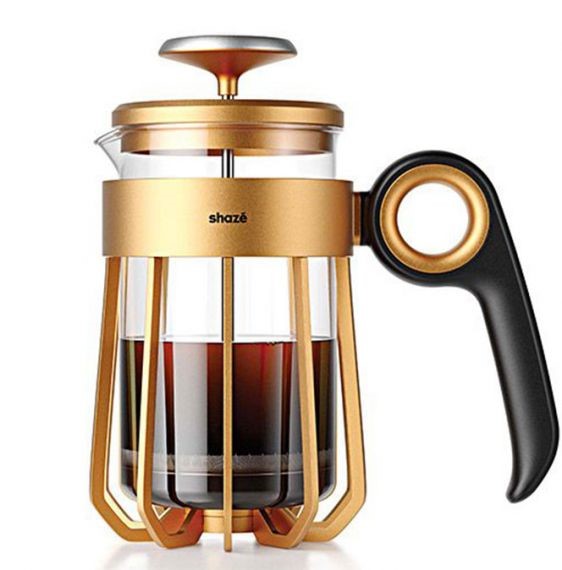 The French Press is yet another special piece of kitchen utility that is manufactured for the sole purpose of milk frothing, you can use this device just the same way you use the pump frother.

Pour your milk in the pump jar then cover it with the lid and then pump through the lid up and down vigorously until the froth is formed to your desire expectation.

You must also ensure that the milk is not full to the brim as there is every probability of milk expansion during frothing which will allow it to fill the jar. The french press is more versatile than the pump frother such that one can still use the french press for other functions like; tea making, coffee making amongst other light functions.

The frothed milk is used to make some espresso drinks like lattes, cappuccinos, macchiatos, americano, mocha, and red-eye. These drinks are usually made with pressured hot water with full flavor and concentrated form of coffee and then made to serve in shots.

The addition of this froth milk to this espresso drink gives it a unique quality taste with a good flavor such that one can not resist.

Irrespective of the kind of technique you decide to deploy to froth your milk, it is important to note that all the method presented above will certainly yield the same outcome but for record purpose, the french press remains the best method for frothing milk followed by the frothing wand and then finally followed by the immersion blenders in that other.