A lot of times, clove users have had to ask this question on the part of cloves to grind. As a clove user and lover, I will help you out with the answer on this post.

What part of cloves do you grind? The dried flower bud of the clove plant is what is usually ground to have in the powdered form. To achieve this, ensure you have a granite mortar and pestle.

You’ll simply get the flower buds and drop them into your mortar after which you’ll grind them down to a fine powder using the pestle.

If you want to use a spice grinder, ensure that a metallic spice grinder is used in order to stop the clove oil from affecting your grinder.

What you have at the end is the ground clove or clove powder as you may please to call it. It is usually advised that you grind your whole clove to powder just when you need to use it as its freshness will show in the taste of your food.

All you need do is to get yourself some good quality whole clove and get grinding!

Can you grind clove stems too?

Yes, Absolutely! Recent research has shown that you can grind clove stems as it also adds more flavor to your dish. There have been some arguments regarding ground clove stems adding flavor than clove buds.

Parts of cloves you should know

You might be wondering if that is all about the clove plant. Well, there are other parts of the clove plant which are the clove stalks, mother cloves, brown cloves, and the exhausted cloves.

The Clove stalks are the slender stems of the inflorescence axis that show antithetical decussate branching. On the outside (externally), they are usually rough, brownish, and irregularly creased longitudinally with short fracture and dry, woody texture.

The mother cloves (anthophylli) are the ripe fruits of cloves that are ovoid, brown berries, unilocular and one-seeded.

Exhausted cloves have most or all the oil in them removed by distillation; hence, they yield no oil and are usually darker in color

Can you use whole cloves instead of the ground?

From experience, the taste of this spice is usually so intense, little wonder it is majorly used in foods. However, there are a number of other uses for this spice – sometimes, only the pungent smell is what is needed and used, whilst others take the most advantage of the compounds which can be found within it.

Different ways cloves can be eaten

Cloves can be eaten whole

Ordinarily, the intense flavor gotten from this spice may suggest that they are not eaten whole. However, they could be eaten whole so long as they are well prepared.

You achieve this by simply soaking the whole cloves in some warm water, making them soft enough to be eaten whole.

In the same vein, they could be added to your soups or stew as the liquid helps in softening them, thereby releasing their fantastic flavor into your dish.

Cloves can be eaten ground

In its powdered form, cloves have a variety of uses. First, it could be used in curry dishes and other Asian cuisines; not just making its way into many curries, the ground cloves could be used for so much more.

Ground cloves could be used for virtually everything and anything – from flavoring some sweet dishes like pear tarts, to creating marinades for your meat, etc.

You could decide to either buy ground cloves or the whole cloves to grind for yourself. However, as I established earlier, it is usually advised that you grind your cloves just when you need to use them.

What you should note before using cloves 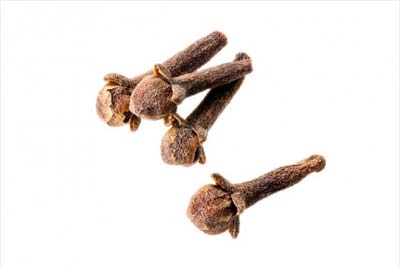 Use your cloves sparingly

Noting that cloves have a slightly bitter and highly aromatic flavor profile, hence, its high intensity, suggesting that one needs to be careful with how much of them they use.

Use your cloves as a garnish

This means that you could ornament your dish with cloves placed around it. In fact, the shape of cloves in your dish makes them particularly attractive.

You could stick them into the exterior of ham to make it have a more attractive appearance; they could also be stuck into oranges or apples – they will not only be attractive in appearance, but the flavor of the cloves infuses into the ham or the fruit.

As earlier mentioned, you could put whole cloves in your dishes to help pass the flavor on to your dish. However, after this is achieved, you are advised to remove the whole cloves as biting into them could overwhelm your palate with its flavor, thereby leaving your tongue numb; recall that cloves have an intense flavor.

Another reason is the texture and shape of the whole cloves because cloves have a nail-like shape with a point, hence if swallowed whole, they could cause a choking hazard very similar to that of fish bones.

Stud onion with whole cloves and add to your soup

With this, you are able to infuse the flavor of clove in your dish without having to grind them and without the trouble of removing individual cloves one after another.

Don’t cook cloves for too long

It should be noted that when cooking with cloves, the cloves usually release volatile oil throughout the cooking process. Cooking them in your dish for too long may result in the same as adding too many cloves to your dish.

By implication, you will end up having a bitter dish that tastes like nothing else but cloves.

For a fact, buying your cloves whole and grinding for yourself leaves the spice more flavourful. However, in this case, you are advised to buy them ground.

This is as a result of the effect of clove oil on plastic; most spice grinders are usually made of plastic, and clove oil is notorious for causing pits in plastic, thus causing it to breakdown.

The pits in the plastic may cause your spice grinder to hold on to the clove’s flavor, and at the end of the day is passed on to other spices that you grind.

What are good substitutes for cloves?

Cinnamon should you run out of cloves, cinnamon is definitely a run to. Simply use a slightly less quantity of it to achieve something close to the clove taste. Meanwhile, cinnamon is filled with its own health benefits.

Nutmeg is another substitute for you when you run out of cloves. Like the cinnamon, make use of a slightly less quantity of it.

Allspice would also suffice as a substitute for cloves.

What are the other uses and benefits of these Cloves?

Cloves, especially the cove oil has a wide range of applications to cure certain illnesses and ailments. This ancient spice has been used and proven in herbal remedies from the past centuries or more

Asides from health benefits, clove oil is also used for cleaning and is used to accompany other homemade cleaners. Simply add 10 – 20 drops of clove oil to half a cup of vinegar and at least four cups of water for an effective all-round cleaner.

Cloves contain certain bioactive compounds that are strong enough to avert or prevent bugs and other insects such as ants. In addition, the strong aroma of the cloves often repels other pests and thus, apparently advantageous.

During the Victorian era in ancient England, a traditional gift saw this spice (cloves) decoratively and attractively piercing an orange – Pomander as it was called.

Gifting a Pomander to someone at the time depicted goodwill and was often placed around the home, filling the home with a beautiful fragrance.

While this traditional culture in England seems to have gone into extinction, it is still very relevant as the beautiful fragrance it gives didn’t end with the Victorian era, but still with us today; you could try it out.

Knowing full well that cigarettes are made of different flavors, the one made from cloves is one of such flavors. The cigarettes made of cloves are called the Kretek and are made in Indonesia. This is sure another area where cloves are used and beneficial.

Saddled with antifungal and anti-inflammatory properties as well as being rich in Vitamins, clove oil is amazingly perfect for your skincare routine.  In addition, it could also be used in hair treatment.

Clove oil which is an extension of cloves itself has a few benefits:

Other uses for clove oil are;

Now, I bet when you are asked “what part of cloves do you grind?” You should be able to give your answers very confidently. Known to be saddled with natural elements along with many many benefits, cloves undoubtedly play important roles in human health.

I hope with this article I have been able to attend to your many questions about cloves. If you’ve got any more questions or any information on cloves that might be very helpful, please do let me know in the comments section below.