Can You Overcook Ham? One of the things you need to be careful about is ensuring that you know the right and perfect time to take away your ham from heat when cooking. Failure to do so may lead to your ham being overcooked.

Seriously, Can Ham Be Overcooked? Ham is considered cooked and ready at 130-145 degrees. Any further than that and you will have an overcooked piece of ham. Also, ham has its natural juices, and even with a lot of glazes, overcooking it will leave it dried out, hard, and without flavor.

You don’t have to be reminded that the dried and overcooked ham won’t be making your dinner too delightful. That will not only affect the taste off your overcooked ham, but it will also make it very crumbly. Cured ham can also be subject to this fate.

Who doesn’t love ham? It’s everywhere. You can cook a ham like a turkey, you can cook a hambone into a nice delicious bowl of soup or most common of all, our good old hamburger, one of the most satisfying fast-food and lifesavers.

Ham is classified under red meat and most of the ham you come across is processed. By processed, I mean it is either cured (food preservation by addition of salt), salted or smoked. The fresh ham is not cured or salted.

Ham can be baked, grilled, roasted, or fried. If you like to avoid oil at all cost, then you can boil your ham too.

It contains a lot of minerals and vitamins, amino acids, and is high in protein. It has compounds that aid in energy production. So, it won’t make any sense if you get the ham overcooked when it can just be avoided.

Let’s get into the gritty part.

Other mistakes that makes ham overcooked 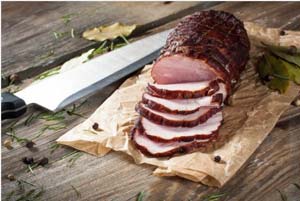 Not lining and greasing your baking pan

Another mistake we make in cooking ham; cured or processed is not lining and greasing the baking pan. Before baking your ham, you should line your baking pan with either foil, brown paper or anything you know will allow heat to pass through it without the pan coming in direct contact with the food.

If you won’t line your pan, more preferably you can wrap the ham in thin foil so it doesn’t lose its natural juices and dry up. Also, grease your baking tin with butter or oil. This prevents the part of ham on the pan from burning or having a funny taste or odor.

In this case, we are cooking ham and we want to get that perfect glaze coating everywhere so you can grease your pan with your glaze. Be sure to put enough so you don’t end up with a burnt pan, a burnt and dried ham, and a lot to scrub off later.

If you probably used it to fry any odorous product like fish, onion, or garlic, get a fresh bottle of oil and ensure that is what you use.

The idea of letting your ham absorb as much moisture as possible by basting or literally soaking it in a marinade is not as wonderful as you thought. When you are done cooking, the glaze coat on it will make it too juicy and we can get a lot of that on our plates.

It will also be slippery to cut. So instead of drowning it, make use of foil to soak in the moisture. That way your ham won’t dry out and you can take off the foil for the glazing process.

Cooking it when it is frozen

So you are running out of time and you know you didn’t pull the ham out of the freezer before you just stuff it into the oven. Well, that’s wrong. Cooking it frozen doesn’t support the slow and even method because your ham will be defrosting not cooking.

By the time the center is free of frost, the meat will be cooked and if there is a bone, it is likely to be uncooked and no one likes a half-cooked. You should leave it to defrost before trying to cook.

Ever had to recook anything because you didn’t set the oven to the right temperature or mixed up the Celcius and Fahrenheit or you brought it out too early?. Either one, it depends on the type of ham you are using.

Cured ham should not be re-cooked, just warm to prevent it from losing its taste, flavor, and tenderness. If it is fresh, you have to start by boiling, but after that, you will have to warm but re-cook if you want it to be steaming hot again.

The type of ham you use determines the preparation method and amount of heat you will use in cooking.

Temperature that is a little too high

Your motto in cooking ham should be slow and even cooking. When you put the ham in the oven make sure the temperature is not high so it won’t dry the ham and make it lose its flavor.

Ham is considered done enough at 145 degrees, so before it gets to that make sure you apply your glaze.

After that, you can turn up the heat a bit until the glaze starts to harden. Then you turn it down so your caramelized detachable shell does not become a hard unpenetrable burnt shell.

It is always best to check the temperature with a meat thermometer from the hambone where it is deepest. If it is boneless, check it from the center. The heat gets to the center last. When the center is cooked and ready then other parts of the ham are ready.

Cooking ham uncovered is another common mistake people make. If you are boiling, you should keep it covered for the sake of the flavor. If you are frying cover because of the tenderness.

And if you are roasting or baking or grilling you may want to keep your ham with moisture to prevent drying up but not covering it doesn’t retain the natural juices or prevent it from drying up no matter how much glaze you apply.

You can wrap the ham in foil but leave a lot, say 1 cup of stock, at the bottom of the pan to ensure that it spreads evenly through the pan. Or you can wrap it in foil and replace it after each glazing process.

Forgetting to score the skin

If you don’t know what this means, scoring the skin is slightly cutting the skin of the ham in a criss-cross pattern.

Why is scoring your ham important? Apart from the fancy look it gives, it allows the flavor to get into the internal part of the meat and not sit on the outside skin alone. It will also help to speed up the cooking process and retain the flavor.

I love to take pride in a perfectly made glaze as I ensure I do this for my ham all the time. The problem is if you glaze too early, it will make a mess in the cooking process.

You are not supposed to apply glaze on the ham until it is nearly done with cooking, about 20-30 minutes to the end of the cooking time.

If you apply your glaze too early, the sugar in the glaze caramelizes and prevents heat from penetrating and cooking the ham.

Things You Need To Do So You Don’t Overcook Ham 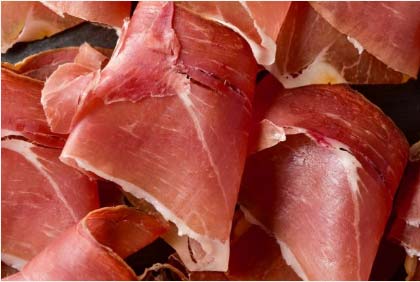 The temperature should not be too high so it doesn’t burn. It will ensure that it cooks thoroughly and you won’t have the problem of adjusting the temperature.

Also, it should not be too low or you are preparing the perfect breeding place for bacteria.

Meat, beef, pork are very prone to lots of bacteria, and very warm temperatures in a closed environment support their growth.

Always check from the center where the heat will get to last to make sure it is completely done. Like I said above, you can make use of a meat thermometer or you can improvise with a metal spoon or chopsticks.

Don’t make it a habit of checking the ham too often. The constant temperature change won’t help the ham in anyway.

Cured ham is already pre-cooked. Recooking will just be like prolonged cooking and in the end, it is flavorless, tasteless, and crumbly.

On the other hand, if it is fresh ham, you can boil but remember to cover the saucepan or pot with a lid so it won’t live flavor.

If it is already cooked, just warm it

If you want it hot just warm the ham. Be sure to wrap in foil. If it is fried and you want it hot, you can tie it in a nylon bag and leave in boiling water for about 10 minutes.

Make sure water doesn’t get into the bag. That way it is hot and does not end up looking and tasting a mess.

Give it a break

After cooking, don’t dig into it immediately. Allow it to cool for a while. Doing this let’s the flavor and moisture soak into the meat and that just makes it moistly delicious.

No part will dry or too juicy and it makes it more enjoyable. Trust me it is worth the wait.

How To Know Ham Is Done? 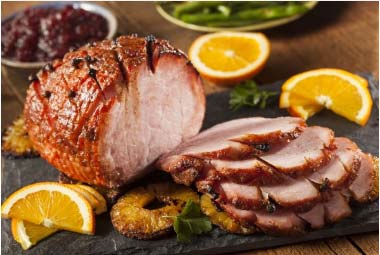 The easiest way is to check the temperature is from the center. The center is the farthest from the skin and is usually the last part to cook so that will be the part you use to ascertain total doneness.

If you don’t have a meat thermometer (this one on Amazon is the thermometer I use), you can use a metal spoon or chopsticks. Stick it into the center for at least ten minutes. When you pull it out press it against your palm to check how hot it is.

A completely cooked ham should make what you used, to be as hot as a cup of hot water.

You can also use color as a determiner. Fully cooked ham should be deep rose or pink. The change of fresh ham, which is usually to a deep rose color is due to heat.

Though not always accurate, so I always advise that you check that your home is cooked by using a thermometer.

How Do You Calculate Cooking Time For Ham

The amount of time used to cook ham depends on two factors.

The first is the quantity. If it is large like for a family reunion, a party, or gets together don’t expect that ham anytime soon. It is just a few slices it should not take up to an hour.

The second factor is your heat source. If you are using a brand new oven or an industrial oven it won’t take as much time as a rusty old 1950s. It is advised anyway to cook ham slowly to ensure even cooking.

If you are cooking about 5 to 7 pounds you can apportion 15-20 minutes to a pound. There that helps. The time given is for ham that is not cold at all.

If it is boiled and you intend to roast or bake it, it may take about 10-15 minutes for a pound because it is softer than the processed ham.

And that’s all about cooking ham the right way. Remember, don’t ever pre-cookedd be mindful if the type if ham you use. If you have any other helpful tips just drop them in the comment section below.