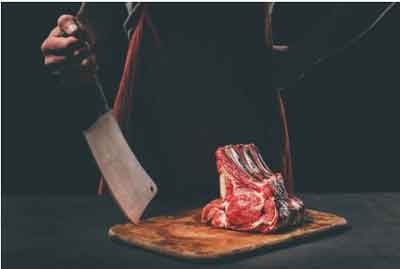 You are on your way home already anticipating a very fast meal preparation for dinner and you realize that you forgot to bring out the meat.

It gets even worse when you remember you did not separate the meat before freezing them. The meat majority of the time will be stuck together into a big lump and most times thawing the whole meat might take the time or make them appear somewhat soggy and cooked.

What does thawing mean exactly as most people might be confused about the correct meaning of this term or mistake it for something else, thawing simply means going from a frozen to a liquid state that is melting.

With that in mind also note that oftentimes thawing allows bacteria to thrive and multiply especially if it is done at room temperature and refreezing the meat after taking the ones you need does not necessarily kill the bacteria and may even allow it to surge.

But if the meat was half thawed or thawed and never allowed to get warm, it can be put straight back into the freezer.

The main aim here is to separate the frozen meat without thawing it and there are quite a few methods out there on getting this done.

Most of the methods shown online would require you to at least partially thaw the meat as it can be dangerous to separate them especially meats like chicken at home with just a knife. But I will be talking strictly about how to separate frozen meats without having to thaw them.

Below are the methods to separate frozen meat without thawing them.

Method one: Use a butcher saw

It can easily be purchased online or in kitchen stores and a stainless steel one is preferable. An example of a great butcher saw I use in cutting my deer is the LEM Products 639 22″ Meat Saw. You can check it out HERE.

You can proceed with this particular method after you have gotten the butcher saw and gloves (optional) for safety ready.

Safety comes first, so wear a safety glove as this will help protect your hand from cuts.

After wearing the safety gloves, hold the frozen meat firmly over a cutting board.

The butcher saw works well with large pieces of meat and they can equally cut through bone.

Pull and push the butcher saw back and forth through the meat pieces until they are completely separated.

This is achieved by applying firm downward pressure on the saw.

Maintain the same speed throughout your cut. You can also try flipping the meat to the other side if it is too difficult to separate.

Method two: Use an electric or manual meat slicer

Note that with this method, the meat you are using should be boneless.

Put the frozen meat on the meat slicer and hold it with a towel. This is because the meat would be too cold

The thickness of the meat can be adjusted with some controls. Cut the meat evenly and swiftly

The meat is ready for use

It is a great route to use in cutting frozen meat without having to thaw the meat.

It saves you time as you can start cutting the meat right away as the meat slicer is very efficient and safe. you also have the option of how the slices will come be it thinner or larger.

Keep in mind that the meat slicer is also flexible and can equally be used to cut vegetables, so you get your money’s worth and more.

Method three: Use a meat cleaver

Use a knife to open up the meat packaging

Using the meat cleaver, Mark out the area on the frozen meat you want to cut and whack right into it.

Repeat step two till you have gotten the desired amount of meat.

The key to this method working is as we stating before, using a heavy-duty knife that is sharp so the weight of the blade will do most of the work for you to avoid slipping and cutting yourself.

Method four: Use a rubber mallet and a chef’s knife

The combination of the rubber mallet and chef’s knife works best for smaller batches of meat and it can cut through any type of frozen meat. Keep in mind to thoroughly clean the rubber smaller before use.

Take out the frozen meat and place it on a cutting board. The cutting board should be placed on a firm surface

Take your sharp chef’s knife and put it in the area where you wish to cut through.

Using the rubber mallet, firmly hit the knife till it cuts all the way through the frozen meat.

Repeat till you are satisfied and the neat is ready to be used.

Method five: Making use of a hack saw

The hack saw is originally used for cutting metals and it has fine teeth. They work excellently well for culinary use in the cutting of frozen meat, (like this one on Amazon).

You need to do these things before the hack saw would be ready to use.

You might need some assistance to Hold the frozen meat steady depending on the size of the meat.

When you are fine cutting the frozen meat, put the hack Saw in the dishwasher to be cleaned and dry it.

FAQs: Can thawed meat be refrozen?

There are certain substances where it is safe to re-freeze meat that has been thawed although a drop in quality of the meat might be noticed. Keep these tips in mind

Defrosting meat in the fridge even to the point that it is totally thawed can be safe to re-freeze.

This is due to the fact that the meat never reached above forty degrees Fahrenheit. It is safe to refreeze within two days in this situation

In the case of meat that has been totally thawed either by using water or putting it in the microwave, you should not refreeze the meat

After experiencing the hassle of separating frozen chicken, you obviously do not want to have to go through it again. Here are some tips for freezing meat

Always remember the golden rule which is to separate your meat pieces individually before freezing.

Thawing frozen foods outdoors or on your countertop should not be done as doing this in the room increases the chances of bacteria developing which may either ruin the flavor of the meat or get you sick.

In summary, We talked above about some safe methods to separate pieces of frozen meat and most of them required using a butcher saw, and so on.

In the end, if you do not want to waste effort or time separating the meat pieces (that is if they were already cut before freezing) then this little trick might work; simply put the frozen meat in a plastic bag and with force, throw it on a hard surface. The impact should break up the block of frozen meat.